Hūpai, the 1000th kiwi chick hatched under conservation programme, BNZ Operation Nest Egg was a milestone achievement. I was engaged to prepare an external communications campaign celebrating the event. In addition my client wanted to raise awareness of how endangered kiwi were and what the public could do to help prevent the decline in kiwi numbers. Three stages to the story were identified: the up-coming hatching, the story of the egg – where it came from, how and why it was being carefully monitored in a hatching facility rather than in the wild, and the much-anticipated arrival of Hūpai.

Media releases were written for each of these stories which were picked up widely across TV, print, radio and web. We engaged a photographer who captured each aspect of the story, including the egg’s hatching – peck, by peck. The best images were offered to media. In particular the hatching story gained significant media coverage. Close UP’s TVONE ran it as their lead story followed by an in-studio Breakfast TV interview with my client the following morning. NZ Herald ran the photo of the newly hatched Hūpai on the front page as did the Dominion Post, The Press and the Waikato Times. Each stage of the story was covered on Radio New Zealand’s Morning Report and commercial radio stations across the country and there was saturation coverage on news websites. My client was interviewed on each occasion. It was a terrific way to thank Operation Nest Egg’s sponsor and the kiwi hatching facilities around the country who work so hard to keep kiwi alive.
Each aspect of the story was fully integrated with social media – twitter, facebook and on my client’s website.

Hupai’s big claims to fame were making headlines on BBC News and the New York Times!

A name the chick competition ran in partnership with local iwi.

The campaign resulted in a significant increase in public interest and awareness, a donation spike and a smiling sponsor. 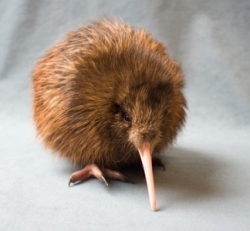