Unveiling of NZ Museum in Europe

Unveiling of NZ Museum in Europe Commemorates Our Fallen, 100 Years On

New Zealand will have a place in Europe to call home with the unveiling of the future memorial museum in Le Quesnoy, France on 4 November – a town Kiwi soldiers liberated one hundred years ago in the final week of World War I.

The museum and visitors’ centre will be the first and only permanent commemoration to honour our country’s effort on the Western Front across both World Wars. In WWI alone, 12,500 Kiwi soldiers were killed, the largest death toll of our people in one time than at any other period in our country’s history. 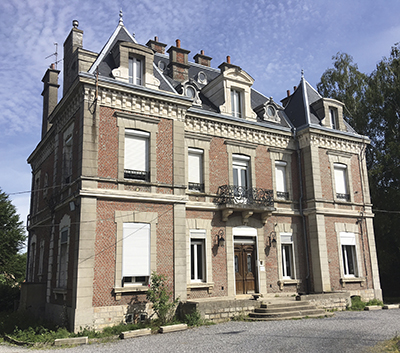 The purchase of the former Mayor’s residence within Le Quesnoy’s old town ramparts as the home of the museum follows seven years of planning by the New Zealand Memorial Museum Trust and now it is reaching out to New Zealanders for support.

The Trust’s Patron, Helen Clark says she expects Le Quesnoy and the museum will become a destination for young New Zealanders travelling to Europe.

“We want to make sure those stories of young New Zealanders who travelled to the other side of the world a century ago are passed on to future generations,” says Ms Clark.

The Trust’s chair, Sir Don McKinnon, says the museum will be will be a vital landmark in our country’s history.

“It is time for us to acknowledge and commemorate New Zealand’s achievements on the Western Front with a museum. It will be a permanent reminder of the men and women that paid the ultimate sacrifice so that we can enjoy the freedoms we hold so precious today.

“New Zealand is currently the only Commonwealth country among all the allied nations without a permanent memorial on the Western Front.”

Sir Don says that the hard work in establishing the museum is just beginning.

“The support of all New Zealanders, including the descendants of those that fought during both World Wars, will be vital to the museum’s success.

“The museum will be a place New Zealanders can visit and return to again and again for contemplation and a warm welcome.  It is largely because of our WWI soldiers’ sacrifices that we all enjoy a positive reputation in Europe today.

“I ask every New Zealander to acknowledge our history and show their respect to our fallen men and women and invest in a place of pilgrimage in Europe by supporting the Museum.”

The unveiling of the museum follows many years of visionary work and Kiwi tenacity by Herb Farrant, Greg Moyle, and Malcolm Brown. Their many visits to Le Quesnoy over the years cemented relationships with the town’s Mayor Marie- Sophie Lesne and her council.

The Museum project has already received significant support from a number of New Zealand organisations including Westpac.

People who wish to become a Friend of the New Zealand War Memorial Museum and to make a donation, can go to www.nzwmm.org.nz

“New Zealand students will be able to use the resources of the Museum to learn more about the extraordinary role their forebears played in the World Wars of last century. Le Quesnoy itself has a unique history, a possible World Heritage site, and the way the New Zealand Division went about liberating it, and saving its special ramparts and its people in WW1, is a lesson in what it is to be Kiwi.

“This place is not just a part of France, it’s part of our heritage too. Student accommodation will also be available on site,” says Trustee Sir Lockwood Smith.

Le Quesnoy, an historic walled town in northern France, was freed by New Zealand soldiers alone on 4 November 1918. The battle for the town started at 5.30am and, after fierce fighting throughout the day, at around midday the soldiers used their Kiwi ingenuity and placed four long ladders against the ramparts to scale the walls. The Germans responded vigorously and by 4pm only one of the ladders remained. This one remaining ladder was set up on a narrow ledge so that it could reach the top.  Under the cover of intense rifle fire, 2nd Lieut. Averill, followed by 2nd Lieut. Kerr and his platoon, climbed the ladder and were quickly over the top and into the town. After some hand to hand fighting, some 2,000 German soldiers surrendered and the 3,000 French civilians in the town were liberated without the loss of a single life.  142 New Zealand soldiers, however, died in liberating the town.

The role the New Zealander soldiers played in single-handedly liberating Le Quesnoy is remembered to this day by the residents, with streets and parks named after us, and even a song written and sung about us called Le Liberators.

France’s gratitude was further shown by the French government selling the former Mayor’s residence to the Trust for 600,000 Euros (approximately one million dollars) – half its current value.

Mayor Marie-Sophie says her people will never forget the sacrifice made by such a small nation from so far away.

“We will always be very grateful to the men from your country for liberating our town. They rest here with us and our bond is very strong with New Zealand. It will never be forgotten,”  she says.

When completed, the museum will exhibit interactive and historic collections, focusing on New Zealand’s military involvement in Europe and our significant contributions in both World Wars. It will include New Zealand soldiers’ personal stories.

On 10 November, a large event at Lake Karapiro domain will feature a re-enactment of the liberation (going over the wall etc). A bespoke wall is being made for this purpose.

For interview opportunities with NZ Memorial Museum Trustees  and with the descendants of soldiers who fought in the WWI battle to liberate Le Quesnoy and for further information please contact: Penny Hartill, Hartill PR, +64 (0)21 721 424, penny@hartillpr.co.nz

The New Zealand Memorial Museum Trust is raising funds to repurpose the historic former Mayor’s residence in Le Quesnoy, France, which has been the headquarters for the local Gendarmerie since 1952. The Mayor and Council of Le Quesnoy are providing their full support to the project.

The site will be developed to include upgraded accommodation for visitors and a new annex. Together the historic building and annex will form a museum that will tell the soldiers’ extraordinary stories and exhibit educational and interactive historic collections from both World Wars.